AGDATA Marketing Manager Steve Dummett has given himself three days to cycle 676km to Cunnamulla. 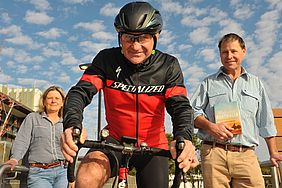 He doesn't bat an eyelid when reminded August is usually the month for robust westerlies.

"It's all mental and  you have to play a mental game," said the 50-year-old, who'll be raising funds for the BeyondBlue charity. "Last night I swam 3km and by 1km I was getting cramps. But I just pushed through. If you get a head wind, you deal with it!".

A marketing manager for farm software firm AGDATA, Dummett has set himself a 266km first stage on Friday 18th August, from his acreage at Haden, north of Toowoomba, to Westmar. The second day is 230km to Bollon, where he'll overnight at the pub, before the 180km run to Cunnamulla on Sunday.

Dummett was bitten by the bike and lycra bug five years ago after taking part in a conquer cancer ride. He said the most he'd ridden in a day so far was 130km. Most jaunts were along the coast, but his rural background made him look west. "I'm aiming it at farmers to raise some awareness in the bush about depression and anxiety," he said. "It happens to the best of us and it can hit you out of the blue. Support is available from groups like Beyond Blue and Black Dog but you've got to ask for it".

Dummett's a keen cyclist but he's not so keen as to attempt to ride home again. Bush poet Tim Borthwick will pick him up in Cunnamulla. "I'll probably have a leisurely start on Sunday morning and still get there before him," Borthwick said. The 47-year-old poet, formerly of Whynot near Quilpie, this week returned from a trip to Sydney promoting his book of ballads and short stories Waltzing Australia, published by ABC Books and Harper Collins. Actor Jack Thompson has also recorded a six-hour 40-minute audio of the book.

Borthwick, who won Winton's 2014 bronze swagman bush poetry prize and was runner-up this year, also has a sideline called Timbuktours, offering personalized trips in a Toyota Prado. "You'd be surprised how many people are scared of flying," he said. He once drove a client to a funeral in Adelaide and has chauffeured ex-Wallaby John Eales and lamb-meat ambassador Sam Kekovich.

In the past three months Dummett's shed 12kg to trim down to 70kg as part of a campaign leading to the Noosa triathlon in early November. He often rides 47km to work at the AGDATA offices in Russell street. Lunch might entail a 10km run and afternoons 120 laps of the 25m pool at Milne bay aquatic centre.

Dummett, who rides a well-used alloy Cervelo S1, logs his progress with a mobile phone app called Strava, which links with the Noosa triathlon fundraisers'page. His friends and donors and can keep track of distances, times, speed, elevation and even wattage generated and calories burnt. If only Dummett and his fellow endorphin junkies could be plugged into the electricity grid.

Reproduced with permission from the Thursday 3 August 2017 edition of the Warrego Watchman.