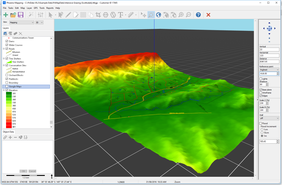 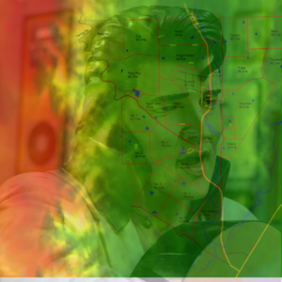 mAKE USE OF THE 3d cAPABILITY IN pHOENIX mAPPING

Phoenix Mapping can display projects in 3D if appropriate elevation data is present. The elevation data is imported as its own file and presents as another layer. On import, Phoenix will automatically render - green through to red - the relief across the extent of the elevation layer and add a legend in the layer list. Even when viewed in 2D mode, a 3D perspective is apparent.  Your existing 2D image and drawing layers will then automatically drape over the top to give you that full 3D effect.

To obtain your elevation data, go to the ELVIS - Elevation Foundation Spatial Data website link below.  An elevation layer can be imported as part of creating a new project or imported into an existing project. Any existing drawing or image layers will render in 3D once the elevation data is loaded.

Elevation layers come in what is known as a DEM (Digital Elevation Model). There are 3 supported DEM file formats - .adf, .grd and ,asc.

Importing a DEM is the same process as importing any other layer. (for full instructions please refer to the Phoenix Help File and search for 3D)

Now, back to Elvis.  How and when was this data collected!?

ELVIS was launched by Geoscience Australia in March 2016 to make it easier for all Australians to access elevation datasets in an open, free and easily accessible environment. The data was originally collected by a specially modified radar system that flew on board the Space Shuttle Endeavour during the 11-day STS-99 mission in February 2000.

Now, that couldn't have been cheap, so how do they give this stuff away?  That is not something that you and I are going to be able to solve right here but what you can do is make use of the data.  Create your elevation layer in Phoenix Mapping and take a look at your property from a whole new angle.