The upshot appears to be that fuel used to propel the vehicle attracts FTC at the “In a vehicle of GVM > 4.5 tonnes ….." while fuel in the refrigeration unit tanks was entitled to the full FTC rate. 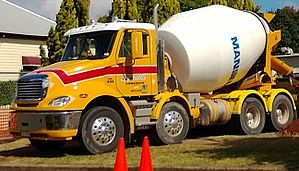 There was a previous ruling FTR 2008/1, and the guide itself that seemed to suggest that all fuel used in the vehicle while on the road, you should reduce the FTC rate by the road user charge, thus ending up at the 12c (or so) FTC rate. In fact the example presented in the guide specifically states that a concrete agitator that uses fuel both to move the vehicle and to agitate the concrete would attract the road user charge for all of the fuel.

This new decision (Sept 2012) notes that there are separate uses of the fuel thus the two different rates.

There is talk of fuel used while the truck is idling while the driver takes a break, and fuel used to air-condition the cab for the driver. That fuel is related directly to travel and purchased for the purpose of travel and so attracts the road user charge – so the 12 c rate.

The links and extracts below show the ATO documentation that were used to come to this conclusion.

This example explains incidental use in relation to a vehicle.

BestBatch Ltd transports wet concrete to building sites for use in construction. BestBatch uses a large concrete mixer truck and travels on public roads to transport the concrete.

The truck uses diesel fuel both for travel and to power its concrete mixer (agitator).

The 2,500 litres of diesel acquired in August 2012 and used in running the concrete mixer on the vehicle attracts the same fuel tax credit rate as the 62,000 litres of diesel also acquired in August 2012 and used to power the vehicle while travelling - that is, 12.643 cents per litre (38.143 cents per litre minus the road user charge).

From the Decision Impact Statement

Issues decided by the Tribunal

The issue to be decided by the AAT was whether fuel acquired by the applicant for use in a refrigeration unit in a refrigerated trailer travelling on a public road was "fuel to use, in a vehicle, for travelling on a public road" for the purposes of subsection 43-10(3). If it was (as the Commissioner contended), the amount of the fuel tax credit to which the applicant was entitled for the fuel would be reduced by the amount of the road user charge.

The AAT found1 that the punctuation in the phrase "fuel to use, in a vehicle, for travelling on a public road" in subsection 43-10(3) meant that, in order for the provision to apply, fuel must be acquired both:

Based on the ordinary meaning of the word "for", the AAT concluded2 that the only circumstance in which the second of these two conditions would be met is:

...where fuel is acquired to use for the purpose of travelling on a public road

The AAT found3 that the fuel in question was not acquired for this purpose, but was instead acquired and used for the "entirely different" purpose of refrigerating cargo inside the refrigerated trailer. It followed that the fuel did not satisfy the second condition of subsection 43 10(3) and was not, therefore, subject to the road user charge.

In discussing the statutory context, the AAT referred4 to the differences in wording between subsection 43-10(3) and the similarly worded section 41-20 and noted that:

...there is a clear intention emerging from s 41-20 to ensure that in the case of a light vehicle, the fuel tax credit is to be denied for all on-road applications of taxable fuel in the vehicle. That is not the case in s 43-10(3), where the use of the word "for" before the phrase "travelling on a public road" is evidently intended to narrow the reach of the provision, such that the RUC on taxable fuel is only imposed where the purpose is to propel the vehicle on a public road [our emphasis].

phrase "fuel to use, in a vehicle, for travelling on a public road" in subsection 43-10(3) only covers fuel that is used in a vehicle:

Accordingly, the road user charge will only apply to such fuel. In the Commissioner's view, it does not matter whether the fuel is located in the same tank as the tank which supplies fuel to the prime mover's engine or whether it is located in a separate tank. The location of the fuel would not, of itself, determine the purpose for which the fuel was acquired (although it may be a factor that is taken into account in working out whether fuel was acquired for a purpose that is incidental to propulsion).

Due to the quality and ease of use of our software, particularly our Fuel Tax Credit reporting in this case, many trucking firms are using Phoenix as their Financial Management and Compliance tool of choice. Download a demo copy today.